skip to main | skip to sidebar

Ah, the Barossa. My grandma turned 80 on the 3rd of August, so J and I headed over to help celebrate and fit in a bit of a holiday as well (it is the year of the sisters' holiday. We have done two so far and have two more coming up, hurrah!). We got in on Friday morning, and our mum (who had arrived earlier that day) picked us up from the airport. We headed straight out to Nuriootpa, the small (4800 and something...I've forgotten!) town in the Barossa where my grandparents live and my mum grew up.

I have such strong feelings about it there, which is odd really because I've never lived there and not really spent very much time there. As kids, we'd head over usually once every year or two to spend holidays with my grandparents. The drive always started well before the sun came up, and was always hot and long. We were allowed to eat fruit loops (I love them and we never had them any other times) which in hindsight seems insane - four bored children, one hot van - give 'em sugar! We'd get in to Nuri always when it was dark (and in my memory always freezing, which doesn't tie in well with the hot drive!), and my grandma would have made up the beds in the girls' room for us with flanelette sheets and a hot water bottle, with their pale blue covers tucked a certain way around the pillows. On this trip J and I made our own beds over in the lounge room and replicated the way grandma made them (a much inferior version though I must say!).

My grandpa built the house they live in, which is just so romantic I think. It's got a huge yard with fruit trees and veggies and grape vines and although it's not in its prime any longer, as a kid I remember it being this amazing playground full of lovely growing things (even better, things one could eat!).

Anyway, we arrived there and spent three days with them - it was just heavenly. The first night J and I hit the town - there are two pubs, the AP (Angus Park) and The Slimey (The Vine Inn). We'd picked up the in-the-know lingo from a previous visit. We drank West End, the local draught, and found that their beer sizes are named completely differently to ours.

We never worked out why a butcher was a butcher, but we drank a few of them in an attempt to find enlightenment that way. To give you an idea how small Nuri is, observe the following phone number spotted in the AP: 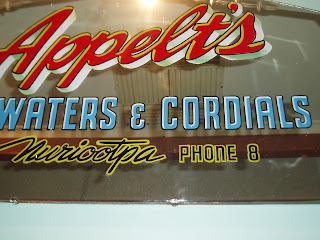 The trip involved lots of driving around (thanks, mum!) to the wee towns, stopping in at wineries, and me getting completely besotted with the almond blossoms, which were out and blooming all over the valley. It smelled like honey and was just divine, and it would spring up around every other corner. I never got sick of it. 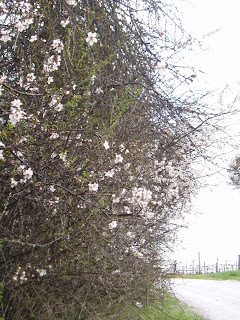 We only hit a few of the larger wineries this time, and I must say I was quite disappointed in comparison to some we'd gone to in the past. Still, even when it's disappointing wine tasting is still wine tasting! 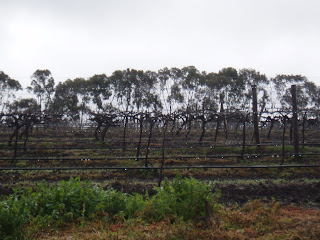 We also made it to a farmer's market (the food there seems so much fresher and more natural than food here. There was so many delicious things. J and I settled for some olive oil that we've had before and some jaffa fudge...mental note: fudge still in fridge, eat some soon).

On one of our drives we came across these wee buildings (in Daveyston, I think. My grandfather, I learned later that weekend, had his 21st in the school hall at Daveyston. He also scored a sneaky kiss from my grandma there!). 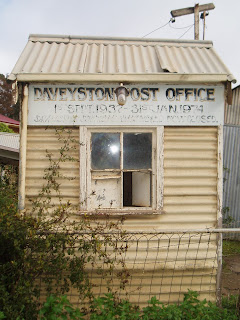 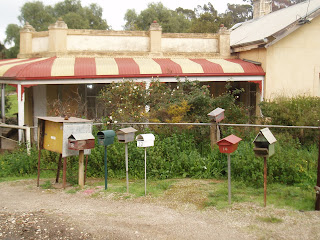 But my favourite thing of all was just spending time at my grandparent's house. The familiar smells, the way my grandma cooks (salty beans and carrots that I loathed as a child and cannot get enough of now!), the way my grandpa dunks bread in his soup and warms his milk every morning to put on weetbix...and just everything about being there. Ah, the Barossa! 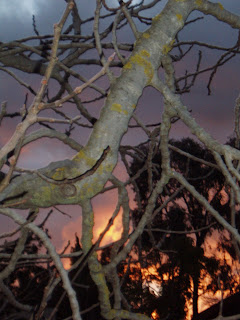